Florida Girls is written and performed by Nancy Hasty. Hasty created it in a Tribeca basement theater several years ago, before eventually playing off-Broadway. It has since performed it in numerous theaters around the country. Florida Girls, takes place in Crestview, Florida circa 1965 and focuses hilariously on the upheaval in a middle class family when religion and beauty pageants collide across three generations. 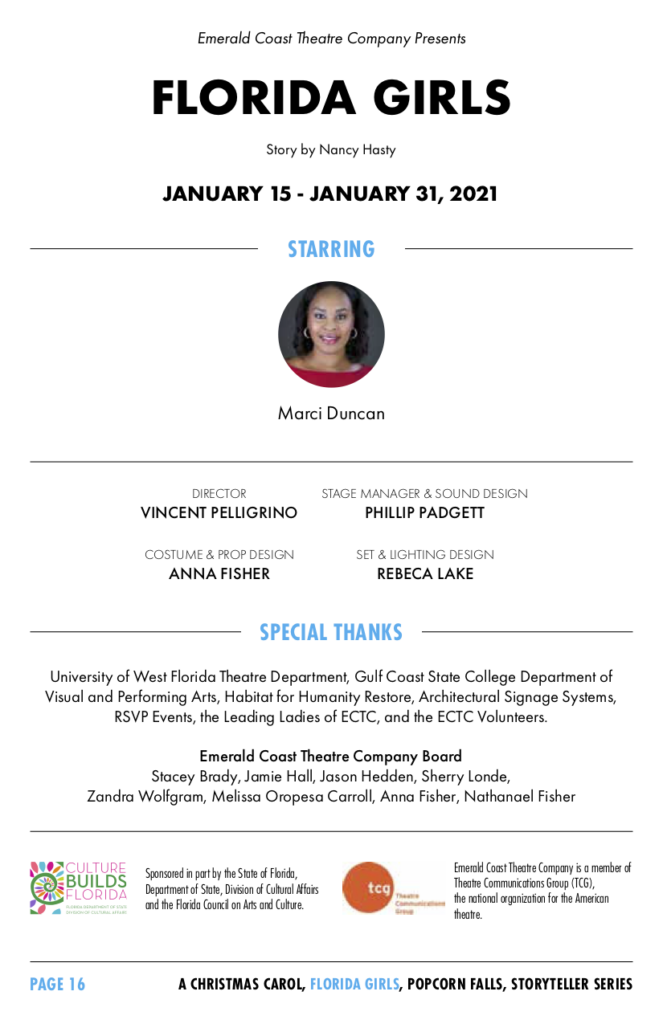 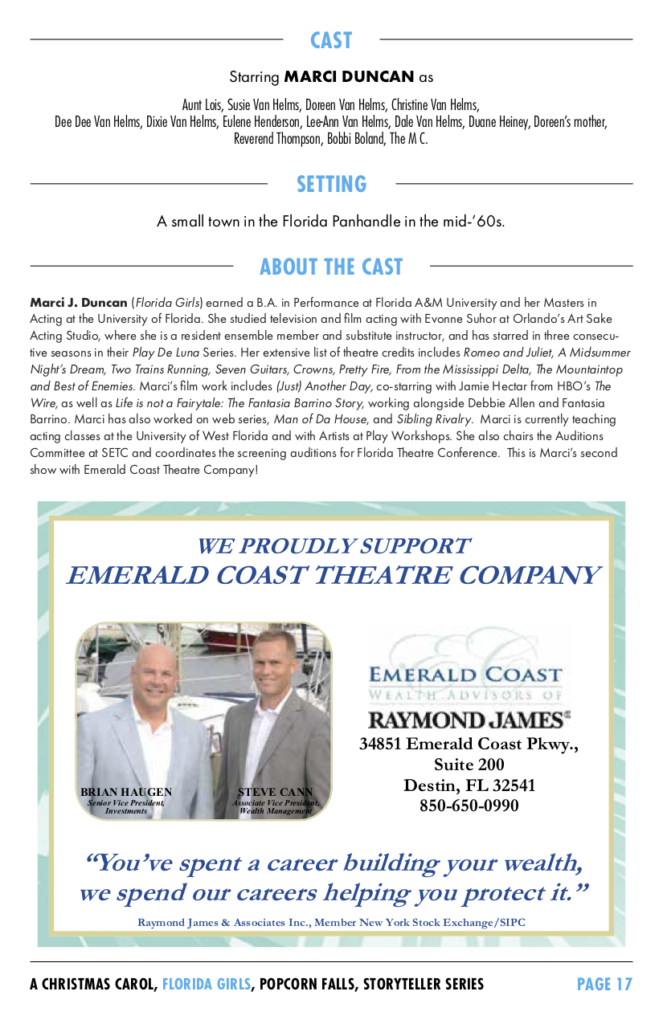 Hasty performs over a dozen distinctly drawn characters, at times simultaneously, demonstrating an energy and originality rarely seen On, Off of Off-Broadway.

A young playwright has found once-brilliant director, Peter, at work as a janitor in the basement of a rehearsal hall. She saw his groundbreaking Macbeth years ago, and never quite recovered from the experience. Disappointed in the commercial theatre he now calls himself the phantom of the rehearsal hall.

But Peter agrees quickly to helm her autobiographical play. After auditioning 162 actors and picking only three, Peter begins by rehearsing scenes from Strindberg's Miss Julie.He also spouts much self-absorbed nonsense about Jerzy Grotowski and Antonin Artaud, and the pragmatic playwright begins to think she's made a mistake.

Soon, however, she is masking a series of professional and romantic capitulations to Peter. The actors too, experience the same cycle of resistance, disgust and terror but ultimately willing, if not dedicated, disciples.

The pattern of education --or is it simply abuse? --repeats itself until finally they make the ultimate decision to end their commitment to the process. The consequences of their collective action is more chilling than a vat of fake blood spilled in a dozen slasher movies.

Shea retires his leading-man image with a vengeance, while Lawrence never fails to convince in her series of submissions to Peter's logic, as do the actor-victims: Tanya Clark, Warren Press, Todd Simmons, And Shula Van Buren. As with any classic thriller, Director provides more than a few character transmogrifications, of which Press delivers two with especially frightening effect.

Lawnchairs is set in a vaguely Southern suburban backyard in 1967 --the actors use accents not unlike the playwright's own Florida-flavored twinge. It's a choice that allows neighbors Geri and Bev to guiltlessly spend their days siping coffee instead of looking for jobs, and allows their husbands Ed and Big Ben to unashamedly demand substantial dinners -- no leftovers -- bathed in gravy.

Lawnchairs speaks to the deeper fascinations of human psychology with a laid-back lack of judgement. It's successful not for grand pronouncements but for its keen depiction of the tiniest moments in life: the childlike giddiness that chases us into adulthood; two women sharing the same lipstick as they preen their mourning dress in anticipations of the guilty social pleasure of a funeral; the pride we take in a casserole; the twistedly funny things parents say to their children in moments of frustration; the candid things we do when we think no one is watching.

Set in 1967 in Crestview, Florida and centers around Bobbi. She runs the charm school and is a theater star. It is a quaint, small town, and is trying to keep at bay the Rock n’ Roll which is becoming more and more present. It’s where a measure of a man is how much he provides for his family, where sexuality is overlooked, charm school’s are still present and the theater is an important part of everyone’s social life.

Twenty years earlier, Bobbi was Miss Florida, and from that she gained valid beliefs of the way ladies and gentleman should act towards each other. Sam is her gay haberdasher neighbor and theatre director. Bobbi is married to her high school sweetheart, Roger, who was once a great football player. He currently works at an office and hates it, and would much rather be doing carpentry. He has become a Joe Schmoe, wearing the suit and tie, and doing the job to satisfy his wife’s idea of a husband, complete with him climbing the corporate ladder and keeping an elegant and prosperous house.

The play opens with Bobbi and Roger prepping the house because the owner of his company, George McGowan, entertains the possibility of a promotion for him. Bobbi then has one of her charm school students, Susan, be hostess and Bobbi nags Roger before the bell rings. When it does, they are shocked to see George has not brought his wife, but Kim, a new, leggy blonde from New York.

The drama heightens because Roger does love his wife, even though he knows he is being pushed around. Bobbi sees Kim as a threat to her marriage, and Kim forms a bond with Susan. By the resolution of the play, Bobbi is alone.